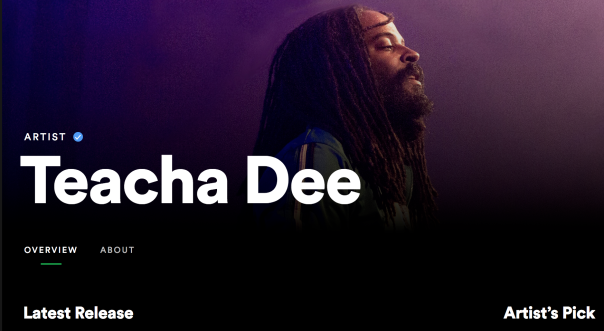 With over 7300 monthly listeners to date, and a current Spotify fan base of 91K, Teacha Dee has officially received the verification “blue tick” from Spotify, which you can be sure to see on all social media and other sites across the web very soon!

On Teacha’s Spotify you can find ;

Songs including his latest release “Rastafari Warning“, and  his most played song on Spotify, “Smoke and Fly“ which has over 300,000 streams.

Both albums, “Reggae Souljahs” and “Rastafari Way” as well as a collection of singles.

An “Appears On” section. On here you can find collabs and riddims selections. Also the artist’s picks of the week.

If you haven’t already, be sure to check out Teacha’s Spotify, and hit follow to keep updated.

Teacha Dee has opened up about the creation of his sophomore album, “Rastafari Way”, one year after it’s release in March 2017.

Speaking from the studio in Germany, where Rastafari Way was recorded, Teacha Dee explains the type of audience he wishes his messages could reach… .

“Rastafari Way album is an album geared towards real lovers of reggae music, and people who listen to music on a deeper level than just the surface“.

This album which was voted 5th best album in a recent poll in Germany, has been doing very well worldwide. Teacha’s release of this visual could not have come at a better time.

This creative and informative mini documentary, titled “Thoughts to Reality: Rastafari Way“, includes video clips from the album’s self titled track, several creative scenes from inside the studio, and a short clip from Teacha’s live performance in Aarhus, Denmark 2017.

Congratulations to everyone who was voted into the Riddim Magazine reader’s poll. From the best new album section which received over 2000 votes, the results are;

1st place goes to Trettman with the album: #DIY

3rd is Gentleman with his album: The Selection

4th goes to Schwarzpaul with: TM100

5th is Teacha Dee and his album Rastafari Way

Trettman gathered a whopping 33 percent of all votes, Miwata and Gentleman scored 6 and 5 percent respectively, while Teacha Dee’s album along with Schwarz Paul’s “TM100”, got 3 percent.

The results show that these 5 albums combined, got 50 percent of all the votes, this is totally amazing, considering the amount of albums of all genres, that were released in 2017.  It is therefore incredible that Teacha Dee’s album, made such a bold stand among the heavy weights of the German music industry.

Teacha Dee’s “Rastafari Way” album was also ranked 2nd in the Netherlands, for three months running, as the best top 50 album released. It got a 90 percent approval rating which translates to 4.5 out of 5 stars.

Rastafari Way was released March 17th 2017, by Tenfloor Records, Teacha Dee’s record label, and was a huge success. Working with Teach on the album were top producers from around the world ;

Greezzly Productions from Italy who produced “Lightning, Earthquake and Thunder“.

Evidence Music from Switzerland whom produced “One Big Stone“.

Two of the voted top tracks off Rastafari Way are, “Rastafari Way” and “Emperor Selassie“, both produced by Perfect Giddimani’s label, Giddimani Records.

All of the other songs were produced by Austria’s “House of Riddim” label, including “Jah Jah Is Calling” which has also been voted as one of the top three tracks off the album.

Produced by Giddimani Records/ House Of Riddim, on the Horn Of Africa Riddim complication, and released in August 2017, Rastafari Way was an instant hit, raking in over 10.5k views within 3 days. So it comes with little surprise, that today we are congratulating Teacha Dee for Rastafari Way reaching 300,000 views!

Rastafari Way is a song about the struggles of adjusting to a Rasta Tafari way of life, a song which many Rastafarians can relate to…

Shortly followed the 2nd album released from Teacha Dee, which, after the success of Rastafari Way, was titled after the song. From the first day he started teaching, and still to this day, Teacha Dee continues to educate his fans through his lyrics…
“Who wouldn’t want to become a student again with an instructor like that?” – Reggaeville

Teacha Dee in collaboration with Giddimani Records and House Of Riddim have released today the official music video for “Forward Black Man”. This track was first released as a single in 2017 and is also apart of the “Civil Rights Riddim” compilation released in January 2018.

The video which features some historical clips of the Honorable Marcus Mosiah Garvey also has a cameo appearance of Skarra Mucci and up coming reggae artiste Hiya Flames. View it here

The video for Emperor Selassie which was premiered by Reggaeville.com on March 6th of this year is now at 100k clicks on youtube.  This song which is a part of the reggae riddim compilation dubbed the Burnhard Spliffington Riddim produced by Giddimani Records in unity with House of Riddim.

This Video which was recorded in Frankfurt on one of the few naturally created dunes in the world, has a simple outdoor concept with Teacha Dee giving a solo performance of a simple but deep and riveting message. View it here.

The dynamic duo Perfect Giddimani and Teacha Dee, have released (through Reggaeville) the official video for the song Positive Energy today. This song which is track 7 on the album Live My Life Again has been getting some good reviews worldwide.

L.M.L.A. released earlier this year by Rose, debuted at number 1 on the Billboard Reggae Albums Charts, slid to number 5 in the second week and climbed to number 3 on its 3rd week. This album also features Anthony B, Lutan Fyah, Kumossi (a female group out of Africa), Stephen Dajure and Sam Gilly who created some special dub versions.

Positive Energy is a medium paced “sing along” song, that has a deep message about coping with negative energies flipping them into good lessons in life. The video however, consists of some speedy transitions with a “in your face” approach and an overall good vibration. Watch it here on Reggaeville.  or view it on YOUTUBE HERE

At approximately 9:00 Pm or 21:00 hours German time, Teacha Dee entered the special stage at Reggae Jam backed by Next Generation Family Band based in Munich. Wearing a pair of fire red shoes and a matching long sleeve button up shirt covered with black suspenders that coordinated with his Black Turban and Jeans pants, he ran out kicking up a storm of cheers from anywhere between 15,000 to 20,000 patrons.
From the very moment his name was announced, the anticipation of the audience could be clearly heard and his appearance did not disappoint. Teacha Dee’s set began with a loud roar which was paid to his presence alone which lasted for couple seconds while he danced and waved hello to the audience from left to right of the stage before he began singing.

Teacha Dee is no stranger to the Reggae Jam massive as it was there about 6 years ago his career took off in Deutschland and the rest of Europe. His appearance now was greeted with the rewards of years of ground work going from clubs to clubs pushing his brand of roots music.

Song after song the audience sang along with him. There were short bouts of extreme clarity as the band played a bit lower than his vocals as he drove the point home on ever song especially the new ones of his album “Rastafari Way“.

At the end of his set, he called upon stage “Don Tippa” who have been on the journey with him musically for as long as his name has been known to patrons worldwide. He left the stage with people begging for more but time did not permit it.

Here is a video provided by “Reggae Story” which highlighted “Smoke and Fly”, “Jah Jah is calling” and “Emperor Selassie”.

Teacha Dee has teamed up with House Of Riddim out of Austria, Giddimani Records based in the United States, Greezzly Productions from Italy, Boomrush Productions from Germany and Evidence Music out of Switzerland to drop what is dubbed his “debut” album today.

This 13 track album titled “Rastafari Way”, has edged away the “Debut Album” title away from ” Reggae Souljahs: Beating Babylon with Music”. This was mainly because “Reggae Souljahs”  was more a compilation of released singles than a complete album when it was released in 2011.

Rastafari Way opened todays sales by holding the number 4 spot on Hungary’s Itunes Charts for several hours as digital shops open. The album has been available for pre-order since February 28th and may have racked up some serious numbers for the 16 days before official release.

The long anticipated project from Giddimani Records and House of Riddim is slated to hit all stores today.

This compilation titled Horn Of Africa, with other artistes such as Norris Man, Perfect Giddimani, Cookie the Herbalist, Young Shanty, Da Fuchaman, Da Real Storm and Rob Symeonn will be available worldwide via itunes, Google Play, Deezer and Amazon.

This riddim compilation has been getting great reviews from popular online radio stations, reggae websites and Selectors on social media. A megamix created by Costa Rica’s Dj Become has broken the 14,000 plays barrier since its release a couple weeks ago.

In strong support too comes the first video off the compilation. The video of the single “Rastafari Way” by Teacha Dee has climbed to over 16,000 clicks in 8 days since its premeire on reggaeville and has been syndicated across China and other countries in Europe.